Sorry I Missed Your Birthday, Dad!


Yesterday, as I signed onto Facebook for my morning ration of clack and clatter about The Decline and Fall of the American Dream at the Tiny Hands of the Upstart From Queens, one of my   Facebook Memories popped up on my screen. It was an old blog of mine, entitled A Story My Father Told Me! Not being inclined to wallow through another memory flogger, I passed on it and went on to more current events. Then, last evening, my cousin Linda reminded me that it was my father’s birthday – October 23rd, the same as my cousin Bernie Botula, my dad’s godson. When I replied to her message, I mentioned that my kid brother Packy had his birthday on the 18th. This morning, as I lurched into consciousness, I realized that, had he lived, my dad would be 108. (He died in 1965 at 52). The title of that Facebook memory and my blog escaped me, so I went back to the source to refresh my memory.

Posted by Mike Botula at 7:02 AM No comments:

MikeBo’s Blog!
Location: Austin, Texas Area
Partly Cloudy 72°F/14°C Roma, Lazio, Italia
Sunny 89°F/31°C Cedar Park, Texas
Buonagiornata!
Back in August I recounted in my blog how I had cut the apron strings connecting me to my cable TV provider. It was a divorce from a longstanding relationship of (at least) three decades. Since my friends and neighbors on Facebook and other social media sites have texted me with comments, I thought it might be time for a follow-up, so I can answer the musical question: how’s that streaming thing working out for you?
In a word: GREAT!
It took me several months and several conversations with the customer service reps from my provider to get it done. For me, cutting cable was more Evolution than Revolution. I did it in steps.
First, I needed to shop around for the necessary add-ons. I was starting with a new big screen 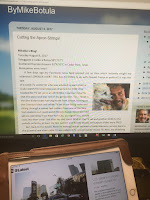 Smart HDTV set. A visit to Amazon brought me a high gain indoor TV antenna, which gave me my local Austin, Texas area channels. Then, off to Best Buy where, after discussing my goals with one of their customer service reps, I brought home an Apple TV adaptor, figuring it would synch up better with my IPad and my IPhone. However, other options are: X-Box, Amazon Fire, Google Chromecast, Roku, Android Smart TV among others.


[Mike Botula is the author of LST 920: Charlie Botula’s Long, Slow Target!  (Amazon Books)  MikeBo’s Blog is a subsidiary of www.mikebotula.com.  Mike is on Facebook,  Twitter, LinkedIn and Google Plus!] Mike’s book is available from Amazon.com or Barnes and Noble Books.