NOT a Paid Political Announcement!


Come on folks, if you truly feel like that, put your grownup pants on and leave. No loss here!


That was a comment on my Facebook page  the other day from a childhood buddy of mine. 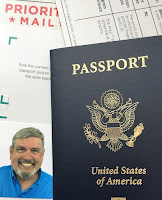 His family used to sit near mine in church every Sunday  back in our hometown. (We even went to the Methodist Sunday School together).  The words saddened me, because we have entered an unfortunate era where the mere mention of wanderlust triggers a heated political discussion. That is the farthest thing from my mind as I pen the words, I’m leaving soon for Rome. Io viaggio a Roma!
Travel has long been a way to seek escape from the humdrum of life’s routine and seek out new adventures. (The motto from Star Trek comes to mind). But, ever since Donald Trump announced that he is seeking the presidency with his pledge to build a great wall, even the most innocent plans for an overseas vacation or a domestic holiday with visiting relatives from overseas have become excruciatingly suspect. Protestors fill the streets of the world. Xenophobia pollutes our beautiful, for spacious skies! But that’s not what I’m talking about here.
Any of my friends who have been following my blog, or who may have stumbled across my web site, www.mikebotula.com know that the Eternal City and I have a long history together.  It began in 2005 when I first stepped off my transatlantic flight from San Francisco to Rome via Frankfurt to be greeted by my expatriate son, Michael and la bella sposa, Laura, at Fiumicino International Airport. Indeed, I was so taken by the beauty and history of Roma, that I have returned time and time again and make sure that I toss a few coins into La fontana di Trevi, to guarantee my return. That ritual has worked every time. Although, once, when the Trevi Fountain was under construction, I asked Laura to toss a coin into it when the fountain returned to service.
In late 2013, during a particularly dark time in my  life, I fled to Rome to sort through my demons. My planned two week journey was extended, and I spent nearly three months there before I decided to return to the U.S. Michael and Laura found me a nice little studio apartment near them, and I settled into the woodwork as a short term resident of Rome. When I came back from Italy, I moved back from Northern California to Orange County to be near my daughter’s family and my grandchildren. It was during this time that I began posting notes about my travels on Facebook, humble scratchings that became my first Rome Diary, which begat my blog and became a permanent fixture on my website, www.mikebotula.com. As this project evolved, I began to think about a new career – as a writer – following my  long  years in radio and TV and my second career in government community relations. After my second major move in 2015, when I followed my daughter’s family from California to Texas to be near my grandchildren, I found the time to finish the book that I had started ten  years before. So, in August of 2016, LST 920: Charlie Botula’s Long, Slow Target! was published by Amazon books. I not only became a writer, but, now, I am an author. Hot diggety DANG! (as they say in this part of Texas).
It hasn’t take me long to feel the wanderlust welling up again. So  now, the passport has been renewed, the reservations are made, and soon I will be winging north and east over the Atlantic in an airborne sardine can stuffed with hundreds of other travelers, destination – ROMA! But this time the normal anxieties of missed flights, bad weather, missing luggage or being clapped in irons by TSA because I forgot about the bazooka in my suitcase is being enhanced by the political storms of the moment. (In Amsterdam, my toothpaste was confiscated. But in Frankfurt, I was told to leave my shoes on because I was slowing down the line). What if, I ask myself, if one of my Facebook posts has been snared by a CIA computer, and I’m now on some “No Go” list? Then there are the fears about getting back into Texas. In the Lone Star State the federal Border Patrol and Homeland Security services are bolstered by hundreds of camo-wearing guys with guns, militia members who patrol the borders with assault rifles. Even regular Texans are armed to the teeth.
As I prepare for my upcoming journey and my forthcoming series of travel blogs, I feel that I have to clear the air for a moment to disengage my wanderlust from the current social media rages about extremists, terrorists, walls and all shades of THEM. Instead, I must prepare to face the puzzled looks and questions of the locals among the Europeans I will encounter, when they detect my ‘Murican accent and ask me, what is going on in the U.S.? The last time I was in Italy, the election campaign was just gathering momentum, and my Italian acquaintances tended to take the campaign with a grain of salt. We survived Berlusconi! You Americans will survive Trump! But, that was before Brexit and Putin and Trump’s Inauguration etc. etc., and so forth! Now, the Europeans are not so sure about that.


Old times there are not forgotten. Look away! (Daniel Decatur Emmett, composer of Dixie)

The first time I traveled overseas – to Germany in 1975 – Europe was a hodge-podge of jurisdictions, each with their own language and currency. For Americans the best form of currency was the travelers check. Fortunately, I was able to purchase my Amex travelers checks  in Deutschmarks, since Germany was where I intended to spend the bulk of our holiday. But we also made jaunts into Italy and Austria, so I not only had to deal with marks, but also Austrian schillings and Italian lira. A trip to market might mean another border crossing and the resulting checkpoint hassles. Fortunately my hodge-podge collection of German words and phrases helped me negotiate the metro and the market. It would be like driving from New York to Washington, D.C. and have to go through a frontier checkpoint every time you crossed a state line. Three years later, I came back to Germany, on a news assignment, and did forays into the Netherlands, Belgium and England. Same hassles. Different language, money etc. The topper however, was our escorted tour into East Berlin. Through the wall! Through Checkpoint Charlie! Thrill a minute, dodging the mantraps in our Air Force bus while a gaggle of East German Volkspolizei with assault weapons kept a close watch on us. The Berlin Wall was the most feared and most hated public edifice in the world at that time. Eventually, it came down and Germany was reunited. Cut to 2017, and the bright lights in Washington plan to reinvite this concept on our southern border. Good luck! But, I digress. And before anyone yells at me again. (This is a travel blog. Remember?) Let’s cut back to 2005 and my return to Europe.
Italy has long since joined the European Union. Instead of having to deal with a wallet full of lira, the Euro had become the coin of the realm in 19 of the 28 countries in the EU. (As of today the Euro is worth $.92 USD). Traveling from Italy to, say, the Netherlands is a easy as driving from New York to Pennsylvania. Big improvement for traveling convenience. What’s more, your ATM card or credit card works in any Italian ATM. In goes the card, out pops the Euros you need, leaving it up to your bank to work out the currency exchange. I used the ATM at the post office across the street from my apartment in Mostacciano when I was on my extended trip in 2013. Except for the language, I found Rome as livable and as easy to get around in as San Francisco or New York. (LA is another story).
So, in a few weeks, I will toss my Sonicare in my suitcase, tuck the Euros from my bank into my travel wallet and grab the shuttle to the airport for my latest Roman holiday. I may even make a pilgrimage to the Czech Republic, from whence my grandparents set out on their Odyssey to America with their three young children. On the way, I have a stopover in New York, where I first saw the light of day and where I began my career in broadcasting. Then to Roma, where my son’s life adventure has taken him. If I had to live behind a wall, I couldn’t do that.

I’ll keep you posted along the way.
Ciao,
MikeBo


[Mike Botula is the author of the wannabe best-seller LST 920: Charlie Botula’s Long, Slow Target!  (Amazon Books)  MikeBo’s Blog is a wholly owned subsidiary of his web site www.mikebotula.com , and is linked to Facebook,  Twitter and Google Plus!]