THE UNSINKABLE CHARLIE BOTULA AND HIS MAGIC LST 920!

It appears that the destinies of two great empires
seem to be tied up
in some Goddamned things called LSTs!
Winston Churchill to General Eisenhower, D-Day:  June 6, 1944

Buonagiornata,
When my father told his best war story to my brother and me over Sunday dinner as we grew up, we hung breathlessly on every word! Our sister ship, LST 921, had just been torpedoed; he would tell us. I was on the bridge trying to see what had happened. Suddenly, I could see the wake of a torpedo coming straight at me!  But, before I could even react, our British escort ship steamed between the torpedo and us… and was blown out of the water! And…our dad would inevitably add, when the smoke finally cleared….the ship had disappeared! 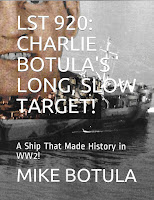 Dad would then go on to relate how his ship stayed in the area to pick up survivors from the U boat attack on his convoy; how Captain Harry Schultz ordered the launch of the 920’s two small boats into the Dover Channel to rescue the fortunate sailors who had survived the attack; how Ensign Harold Willcox dove repeatedly from the Higgins boat into the chilly water to help the hapless sailors from the LST 921 into the boat and safety. All the while, he told us, officers on the bridge sighted the German sub’s periscope numerous times. The U-boat was obviously looking for an opportunity to kill again!
My brother Packy and I never tired of our dad’s war story, and we begged him to tell it, over and over again! But, as I would come to discover many years later when I applied my skills as a journalist – honed over many years in the news business – to the story, that Charlie Botula had only told his sons a fraction of the story!  Lieutenant Charles Botula, Jr., Executive Officer and second-in-command of USS LST 920, only knew part of the full story of 14 August 1944 himself. He died in 1965, well before all of the facts of that day would come to light.
My book, LST 920: Charlie Botula’s Long, Slow  Target! was published by Amazon Books in August of 2016, shortly after I moved from California to Texas. Despite the fact that my research and writing on the subject, had taken more than a decade to complete, I was totally unprepared for  the response I got from my readers. The result is my second edition of LST 920: Charlie Botula’s Long, Slow Target!
As the son of LST 920’s Executive Officer, I felt a special responsibility to tell the story completely. The book had just been published when I received an email from a family member of the torpedoed LST 921. The telegram received by the family following the attack said only that their relative was MIA – Missing In Action! Years had passed and the family had only been able to assume the worst. Only when this particular relative read the casualty list I included in the book, did the family finally have confirmation of the fate of their loved one – 72 years after the fact! Only then did the family of the hapless sailor have closure. It had fallen to me to relate the grim news to the family.
Another mystery involved the identity of the 921’s ship’s cook rescued by Motor Machinist’s Mates Lloyd Meeker and John Abrams from beneath a tangle of debris as they made their own escape from the flooding engine room of their sinking LST.  For that, I have to give credit to Curt Pederson of Ridgefield, Washington. Curt told me that the story of that rescue sounded very much like the wartime experience of his friend, Chuck Watson, a veteran of the WW2 US Navy. Sure enough, when I talked to Watson by phone a few days later, we confirmed the story. I related Chuck Watson’s story in my blog entitled “The Unsinkable Charlie Watson!”  (What else?) Here in 2019, at the publication of the second edition of my book, former LST 921 Ship’s Cook Charles Watson is a hale and hearty 97 years old. He lost one of his legs in the U boat attack, but otherwise is as fit as a fiddle.
My dad  always told my brother and me that his ship did not pick up any survivors from the British escort vessel.
But I found out later that a few survivors were picked up by  a British rescue ship
out of the water along with Don Joost, the Engineering Officer of LST 921. This was confirmed in 2004 when I visited Joost at his home in Walnut Creek, California. My father did not know about this part of the story.
Late in 2018, I received another email from Ms. Gillian Whittle, great-niece of Able Seaman William Todd, Royal Navy. Ironically, Bill Todd was also the ship’s cook aboard the ill-fated British Convoy escort ship – LCI(L)99. Ms. Whittle wrote, Bill, as he was known, was only 19 when he died. He was acting Able Seaman and actually the ship’s cook. We as a family are very proud of him.

The fate of the submarine, U 667, provides the final mystery. My dad never knew the identity of the U boat that attacked his convoy – EBC 72. Don Reed, my dad’s friend and the Communications Officer of LST 920, embarked on years of research following the war. It was Reed who identified the U 667. The rest of the information  about the sub came from the US  National Archives and the Kriegsmarine archive of the German Navy through the website: www.uboat.net. That’s when I learned that U 667 had struck a mine ten days after the attack on dad’s convoy as it returned from patrol. U 667 sank with all hands somewhere near its base at La Pallice, France, where it rests to this day.
Enter French diver Christophe Moriceau with the final piece of my puzzle. Moriceau is an expert diver who belongs to a dive organization called L’Expedition Scyllias. Tof, as he is known to his compatriots, told me in his email that the wreck of U 667 had been located in 2002 along with the hulk of another U boat, but not positively identified until 2014. The Kriegsmarine archives revealed that U 667, under the command of Captain Karl-Heinze Lange, sank four ships on what turned out to be its final patrol: USS Ezra Weston, HMCS Regina, USS LST 921, and HMS LCI(L) 99. During the time U 667 was away from its base on patrol, the Royal Air Force laid a field of anti-submarine warfare mines across its return route back to base. Instead of heading home to a heroes' welcome, U 667 struck one of these mines on 25 August 1944, and immediately sank with Captain Lange and the entire crew. Moriceau sent me a series of photos of the wreck site of U 667 taken by Jean-Louis Maurette, the Chairman and Founder of L’Expedition Scyllias.


Retracing my father’s footsteps after so many years has given me, his older son, the perspective of history. It has been an incredible personal journey. I have gotten to know my family, especially my own father from a much closer point of view than I could when I was growing up into adulthood. During our visit, Don Reed, dad’s fellow officer on the LST 920 quipped to me, the crew was made up of kids from Pennsylvania and West Virginia. The biggest body of water they had ever seen was a river or a lake. Our ship was welded together by women who had never been away from home. The enemy couldn’t keep up with us. Together, we went out and won a war!
Ciao,
MikeBo

[Mike Botula, the author of LST 920: Charlie Botula’s Long, Slow Target! is a retired broadcast journalist, government agency spokesperson and media consultant.   Mike’s book is available from Amazon Books in Kindle or paperback. You can read more about Mike Botula at www.mikebotula.com]