back, and within the next few minutes, the aft portion of the ship would sink along with half of the crew. My father, Lt. Charles Botula, Jr. watched from the bridge of his ship, LST 920, as a second torpedo cut through the water heading directly toward his ship. Suddenly, a British escort ship, LCI(L) 99 steamed between LST 920 and the oncoming torpedo, and was blown out of the water.
Following an anxiety-filled, but otherwise uneventful voyage across the North Atlantic, LST 920 was in a convoy steaming across the Dover Channel from Milford Haven, Wales on the final leg of its long wartime journey to Falmouth, England. It should have been steaming toward the Pacific, but wartime logistics had suddenly changed and now it was headed for Normandy. Ensign John J. Waters noted in the ship’s log at 16:54 hours that LST 921, sister ship to the LST 920 had been hit by a torpedo. American and British lives would be lost, many sailors would be wounded and many individual acts of heroism would be noted. But, the event itself would merely be recorded in official Allied wartime records and little notice taken until many years later.
My dad told that story to my brother Packy and I over Sunday dinner for years. But, the whatevers nagged at me for decades. Whatever happened to that Nazi U-boat after the attack? Whatever happened to Captain Harry Schultz? Whatever happened to the guys that Ensign Harold Willcox pulled out of the water? Whatever happened to the crew of that British ship? My father’s story and the remaining questions it raised, eventually prompted me to put my journalistic skills to work on a very  personal family story, and in August of 2016, my book LST 920: Charlie Botula’s Long, Slow Target! was published by Amazon Books. So, my annual tribute to my father’s war-time

close call is also an opportunity to circulate a reminder about my own contribution to American literature and the history of World War 2. LST 920: Charlie Botula’s Long, Slow Target! is available in paperback, a Kindle version from Amazon Books, and a print-on-demand paperback edition is available from Barnes and Noble. (You can either order on-line from BarnesandNoble.com or in the store at the Customer Service desk). Readers in Australia and New Zealand can order it from Booktopia.com. Elements of dad’s story also appear prominently on my website: www.MikeBotula.com.
Charlie Botula came home from the Pacific War in December 1945. I remember that moment just as vividly as I remember attending the commissioning of LST 920 in June of 1944. After he came home, the family moved back to Riverhead on New York’s Long Island and we all went on with our lives. Other young veterans came home, too, to build their homes and raise their families. Some of them married their high school sweethearts and started families. A few others brought home their war brides, bashful young women with odd-sounding accents. After a while,  among the returning veterans, there were other people with strange

accents, DP’s. DP was an acronym for Displaced Person, the official Red Cross designation for people who had lost everything because of the war in Europe. About the time I entered third grade I started making friends with new classmates, who spoke little or no English. We grew up together.
Mary Botula died in April 1961 after a long battle with cancer. Dad survived the war by 20 years, dying just a few days short of his birthday in October 1965. Packy went back to college, got his commission and spent his career in the US Air Force. I went back to Arizona where I was working in radio and went about building my career. In 1966, along with my new wife Donna, we went on to California where we both built careers and raised our two children-Dana Lynne and Michael. Through all my travels, I brought along Charlie Botula’s  family photos, Navy records and letters, and other personal documents. As we moved on with our lives, the memories of dad’s war stories faded somewhat, but I continued to carry them with me.
One evening in 2003, as I surfed the internet I came across a website devoted to World War 2

Navy veterans. On a whim, and without any expectations, I left a message: My father, Lt. Charles Botula, Jr. served aboard the LST 920 as executive officer from June 1944 until December 1945. I would like to hear from anyone who might have served with him. A few days later I heard from the LST 920’s former communications, officer Don Reed. Mike, I served aboard the LST 920 from its commissioning in June 1944 until it was decommissioned in 1946. I knew your dad very well. Please let me know how we can get in touch.
That brief exchange opened a whole new vista for me on dad’s wartime experiences. The first stop was to meet Reed and talk to him first-hand about my dad and his war-time experiences. So, my son Michael and I drove from my home in Sacramento, California to Alameda across the bay from San Francisco to meet Ensign Reed. Michael never knew his grandfather since dad died in 1965. seven years before my son was born. Over dinner, Reed shared his photos, his recollections and his research about the attack on his convoy in 1944. He too, had survived that experience with many unanswered questions. Next step for me was to reach out to other crew members from both LSTs who had lived through that experience. A letter to the U.S. LST Association brought me a list of ten or so, veterans of the two LSTs who were members.  I wrote to each one of them, asking if they would share their memories.
Their response was heartwarming. Seaman Larry Biggio had started a website dedicated to the

crew of LST 920. Biggio and Reed had kept meticulous track of the crew of the LST 920 and of the ship’s timeline throughout the time it was in commission. I relied heavily on their research in writing the book. Radioman Fred Benck and Seaman Joe Wallace wrote accounts of that long ago day. From the ill-fated LST 921 I talked by phone with Master Machinist John Edmonds and Seaman Lloyd Meeker who gave me their accounts of their escape from the engine room of their sinking ship. Captain Harry Schultz’s son Tim, his grandson Robert and nephew Kelly Schultz provided valuable insights and information about the pivotal character in my story. Captain Schultz had disobeyed direct orders to bring the LST 920 about and return to rescue the survivors of the 921 and the British escort vessel. I talked by phone with Engineering Officer Jerry Gerard who was a good friend of my dad’s and served with him.
Other accounts came from Tom Willcox, the son of the heroic Ensign Harold Willcox, who dove repeated into the chilly waters of the Dover Channel to rescue survivors. John Ross, the stepson of

Seaman Ray Willis contributed some 200 photos from the LST 920’s clandestine darkroom. Photos and memories were also contributed by Robert Waters, son of Ensign John Waters, who witnessed the torpedoing from the bridge and noted it in the ship’s log. I also was able to meet and talk with the Engineering Officer from the LST 921, former Ensign Don Joost, who trained with my father and knew him well. My father and other survivors of that event knew only that they had been attacked by a German U-boat, but nothing beyond that. My father never mentioned over those Sunday war story telling’s, that the German tracked them for several days following the attack, looking for another kill. But, when former Ensign Don Reed guided me to the wartime records in the National Archives, I struck the mother lode of wartime Nazi Navy history.
From the German archival website uboat.net which is dedicated to the wartime German Kriegsmarine, I was able to research the U-boat that carried out the attack, the U-667, from its launching in 1942 at Hamburg, Germany to its encounter with a deadly mine on August 25, 1944.
Onward and upward!
Ciao,


[Mike Botula is the author of LST 920: Charlie Botula’s Long, Slow Target! writer of  MikeBo’s Blog and producer of the website www.mikebotula.com.  Mike’s book is available from Amazon.com or on-demand at Barnes & Noble.

Posted by Mike Botula at 9:11 PM No comments:

A few days ago my Facebook news feed popped out an item which instantly caught my attention! (SPOILER ALERT: This has NOTHING to do with Donald Trump or politics!) It was the tale 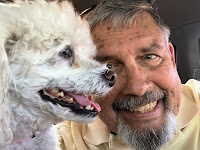 of a cable TV customer who was amazed to learn that he could watch his local television channels for FREE if he hooked his TV set up to an ANTENNA. I realized instantly that this poor soul was not of my generation. For, I recall in the dim distant past running home from school, turning on the Emerson black and white TV set in our living room and sitting through a snowy test pattern from one of the New York stations so I could watch Howdy Doody! Since we lived almost 100 miles from New York City, our signal was, should I say, less than crisp!  But after my dad spent $450 on the TV set and another $100 for the outside antenna, at least the test pattern and Howdy Doody and Captain Video were FREE!
But, back to the future. Now I’m looking back at decades of cable television service, back to the primeval era when cable TV was called CATV, or Community Access TV. Now, we all belong to the Online Generation!


[Mike Botula is the author of LST 920: Charlie Botula’s Long, Slow Target!  (Amazon Books)  MikeBo’s Blog is a wholly owned subsidiary of his web site www.mikebotula.com , and is linked to Facebook,  Twitter,   LinkedIn and Google Plus!]