Back Story: LST 920 and Charlie Botula! 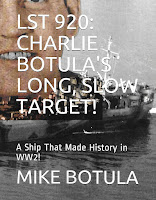 Lord knows, I did not set out to write a book about a war story my father  told me and my kid brother as we were growing up! But, that’s what I did. And, the reaction was life-changing for me. By the way – it will soon be the Seventy-Fifth Anniversary of the U-boat attack on my father’s convoy in the Dover Channel during World War Two:  August 14, 1944.  A quick recap: LSTs 920 and 921 – sister ships, having been built and commissioned in the Bethlehem Steel Shipyard in Hingham, Massachusetts, were part of Allied Convoy EBC 72, en route from Milford Haven, Wales to Falmouth, England on 14 August 1944, when the convoy was attacked by U 667, commanded by Captain Karl-Heinze Lange. U 667’s first torpedo struck LST 921 toward the stern, breaking the back of the 328 foot-long landing ship. The dazed crew would have less than five minutes to rescue the hapless souls in the stern section. The explosion triggered the alarm for General Quarters aboard the LST 920, and as the crew scrambled to their battle stations, the Captain – Harry N. Schultz and his Exec – Lieutenant (j.g.) Charles Botula, Jr. raced to the bridge. Once there, Lt. Botula closely scanned the waters around his ship through his US Navy-issue 7 by 50 binoculars.  His heart must have skipped a beat or two as he spotted the indelible signs of a torpedo’s wake homing in on the middle of his ship! That torpedo was coming straight for us, and there was nothing to do but watch it hit us, he would tell my younger brother and me as he recounted the events of that August day over and over as we grew up. Suddenly, a British escort vessel, LCI(L) 99 raced between the on-coming torpedo and LST 920, and took the torpedo intended to sink LST 920. The resulting explosion blew LCI(L) 99 out of the water. After the blast, I watched as the smoke cleared, said my dad. All I could see was smoke and bits of floating debris. The ship itself had vanished!


On board LST 921, Engineering Officer Don Joost had just left the engine room and had returned to his quarters to lie down for a few minutes before chow, when U 667’s torpedo hit. Below him Motor Machinists John Abrams and Lloyd Meeker were momentarily trapped in the fast-flooding engine room. In another part of the ship, the ship’s cook Seaman Charles Watson found himself trapped under a tangle of shelving in one of the ship’s passageways. And, Seaman Second Class Charles H. Moore would be trapped in the sinking stern section of his ship and go to the bottom of the Dover Channel along with several dozen of his ill-fated shipmates, and two of the LST 921’s officers. Aboard the British escort vessel, LCI(L) 99, Acting Able Seaman William Todd…age 19, the ship’s cook, would be killed by the torpedo’s blast along with most of his shipmates.

As I said earlier, I did not intend to write a book about my dad’s wartime experience, but that changed in 2003 after I left a message on the U.S. LST Association’s web site, asking if any association member had served aboard the LST 920 with my father. In a few days my note was answered by Don Reed, the 920’s Communications Officer. He told me in his reply that he had served with him since the ship was commissioned in June 1944 until dad left the ship in November 1945. Since, I was living in Sacramento, I decided to drive with my son, Michael, to Alameda where Don worked as a volunteer aboard the USS Hornet to meet him and hear the story anew. Don Reed was part of the original crew of LST 920, and was aboard for her entire time in service, becoming  her last Commanding Officer in 1946, before she joined the “Mothball Fleet” in Suisun Bay. This meeting with Reed led to other meetings, telephone interviews and letters from other members of both LST crews. Instead of a straightforward war story, my father’s tale became a wartime mystery with a lot of unanswered questions:


We were supposed to go to the PACFIC! Reed told me and my son Michael, over dinner in Alameda, when we finally met.  We were on our shakedown cruise when we were ordered into the Philadelphia Navy Yard for a new paint job, and to take on a TOP SECRET cargo. Then we received orders to join up with a thousand ship convoy out of New York and head to EUROPE! Later, I would hear similar versions of Reed’s account from officers of both LSTs – the 920 and the 921. A few weeks later, I drove over from Sacramento to Walnut Creek, California to meet with Don Joost, former Engineering Officer of the ill-fated LST 921. Joost shared his pictures with me and talked to me about the secret cargo carried by the two LSTs. There was a lot of speculation about what we were carrying, said Joost. Some of our officers thought it was mine-sweeping technology. But, I was of the opinion that our secret cargo was technology designed to foil the acoustic torpedoes the Germans were just starting to use. Indeed, late in the war, the German Kriegsmarine introduced a new torpedo designed to home in on the sound of the enemy ship’s engines. Is it possible that the Germans knew what your ship and the other LST were carrying?  I asked Joost. During the war, the Germans had a highly sophisticated spy network operating on the U.S. East Coast. It’s not beyond the realm of possibility, Joost replied. But, the answer to that question probably lies on either the bottom of the Dover Channel in the stern of LST 921, or at the bottom of the Bay of Biscay, in the hulk of U 667!


The U.S. LST Association required that I join the association before it would share the names and addresses of the former crew members of LSTs 920 and 921 that I sought. But, membership was a small price to pay for the first-person accounts that I would gain. At Don Reed’s suggestion, I obtained the ship’s logs for my dad’s ship for 1944 along with an aerial photo of the LST 920 at sea for the first time – painted in Pacific Theater camouflage colors. Through the contact list provided by the U.S. LST Association, I was able to either arrange telephone interviews or obtain first-person accounts with a dozen survivors of the ordeal. From that little exercise, I was able to craft a short article for The Scuttlebutt, the LST Association’s newsletter. After evaluating the material that simply did not fit into the one thousand word article, I made my decision to do a book. My book, LST 920: Charlie Botula’s Long, Slow Target! was published by Amazon Books in August  2016, shortly after I moved to Texas. Almost immediately I began to get emails from the quickly diminishing crew members of the LST 920 or 921, or their friends or family members. I quickly realized that many of the family members of those who lived through the events of 14 August 1944, did not have a father like mine who freely recounted his wartime experiences. And indeed, many of the letters I received containing the first-hand accounts were accompanied by a sentence or two explaining that they were telling these stories for the first time.  I got the eerie feeling that they were being given permission  from their Executive Officer, through his son, to finally tell their stories. Such was the emotional connection that I developed with these old shipmates.


By telephone I spoke with Motor Machinist’s Mate John Abrams, who recounted the escape that he and Lloyd Meeker made from the engine room of the LST 921, and their subsequent rescue of the ship’s cook, Charlie Watson. Both Watson and Abrams told me how Abrams  took his own life jacket off and gave it to the badly injured Watson. I spoke with Ensign Jerry Gerrard, the Engineering Officer of LST 920 for his account of the attack and Captain Schultz’ disobeying the direct order to proceed onto their port of Falmouth, in order to come about and pick up survivors from their sister ship, LST 921. The rest gave their first-hand accounts in their letters. It soon became obvious from my father’s account of the incident as well as the other first person accounts, that there was not much known about the submarine that carried out the attack. That would come later in my research under Don Reed’s guidance. Reed, who had done extensive research on the attack, knew that U 667 had struck a mine two weeks after the attack on the convoy, and its wreckage now lay on the bottom of the Bay of Biscay near the U 667’s home port of La Pallice, France. Even my own father had not known that when he died in 1965. So, I was pleasantly surprised to hear from a French diver named
Christophe Moriceau, who not only knew the fate of the U 667 but had actually dived on the wreck site. Moriceau is a member of L’Expedition Scyllias,  a French diving organization. He explained that, while the wreck had been located in 1972, it had been mis-identified as the wreckage of another U-boat. Not until 2014 was the wreckage formally identified as that of U 667. Given this new information, I decided to draft a new edition  of LST 920: Charlie Botula’s Long, Slow Target!  This was done in Spring, 2019.

Perhaps the largest contribution that the book makes is proving information to the families of the two ships. One family member wrote to tell me that up until my book was published, the only information the family had about one of their own who’d been killed in action, was a tattered telegram from the War Department. Looking back on Gillian Whittle’s note about her great-uncle William Todd, the young Able Seaman aboard the British Escort ship who died that day, I am glad that I was able to provide even sketchy details of his last moments. She ended her letter saying, we cannot let the memories of these great people be forgotten!


Most of the men who sailed aboard LSTs 920 and 921 are gone now, but a very few are still with us. Seaman Charles Watson, the 921’s cook is a hale and  hearty 97, despite losing a leg in his ordeal. A Signalman from the 920, James Dietrich is a healthy 94 years old and walks daily for exercise. Seaman Harold Dunagan, who shared his accounts  of helping survivors from LST 921 is now confined to a nursing home. His daughter wrote me: He was very proud of your first book and keeps it on the table beside his chair at all times!


As I said earlier. I did not set out to write a book, but I’m glad that I did!
Ciao,
MikeBo


[MIKE BOTULA, the author of LST 920: Charlie Botula’s Long, Slow Target! is a retired broadcast journalist, government agency spokesperson and media consultant. His book is available from Amazon Books. You can follow his blog at: mikebotula.blogspot.com, including his Rome Diary series, and learn more about Mike Botula at: www.mikebotula.com ]
Posted by Mike Botula at 8:59 AM 1 comment: