The Memories Linger On!

Buongiorno,
To borrow a Mark Twain quote from the home page of my website www.mikebotula.com... “Travel is fatal to prejudice, bigotry, and narrow-mindedness, and many of our people need it sorely on these accounts.”
I heartily second that motion, Sam! Travel has definitely changed for the better my personal

Posted by Mike Botula at 8:24 AM No comments:

The Tour Guide Who Wasn’t There! UPDATE!

Diario di Roma II (Rome Diary 2)
Monday October 5, 2015
Clear 68°F/23°C in Roma
Cloudy, Scattered Showers 63°F/17°C in Rancho Santa Margarita
Buongiorno,
(Contains updated information)
Back in the 1950s before Elvis and the Rock and Roll Revolution, pop singer Patti Page had a hit song called Learning My Latin! I had actually heard the song first as part of arranger-composer-conductor Gordon Jenkins’ classic Manhattan Tower, which I stumbled across recently on ITunes. It

made me think about my very first trip to Rome in 2005, and my first visit to The Forum, guided by my son, Michael. We walked from the Coliseum past the Triumphal Arch into the very heart of the Roman Empire. The Senate was located here along with other ruined marvels from Rome’s glory days. Then, Michael pointed to a desolate patch of ground and told me, Right on this spot is where Julius Caesar was assassinated. He smiled, Et tu, Brutae?  Yikes! I replied, Of course! The Ides of March 44 BC. March 15th.
As a professional guide, my son loves to punch holes in historical myths. This was the first time I had been treated to his particular talent. I thought it happened on the grand stairs of the Senate, I said. No dad,  he replied somewhat condescendingly. It was right here, behind the place they used to execute the Vestal Virgins who strayed from the straight and narrow. In spite of Shakespeare’s depiction and Hollywood’s numerous movies, this weed patch amidst the ruins of the Forum marked Julius Caesar’s demise. Ālea iacta est! I said, The die is cast! It was then that I remembered my high school Latin class at good old Riverhead High School. Then I said, Omnes Gallia divisa in partes tres! What are you saying, dad? My son asked. All of Gaul is divided into three parts. It’s the opening line of Julius Caesar’s “Commentarii de Bello Gallico.” That is Caesar’s narrative of his military campaigns in Ancient Gaul. Remember “Veni, Vidi, Vici?” It was Julius Caesar’s after action report on his Gallic war, “I came, I saw, I conquered.” I still remember some of my high school Latin. I sure wish we could show this to Mr. Diamond. On that trip and the subsequent visits to Italy, I found myself time and again seeing a place for the first time, with the definite feeling that I had been there before. And I owe that to Morris Diamond.
Who’s he, my son asked. Morris Diamond was my high school Latin teacher, I replied. To this day he is a legend to any kid who went to high school in my home town in the ‘50s and ‘60s. This is all coming back to me now, because I had a teacher who brought a dead language and an almost 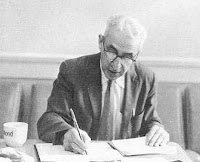 forgotten history lesson to life in living color and stereophonic sound. It’s true! Everywhere I’ve gone in Italy, the Coliseum, the Forum, the Circus Maximus and along the Tiber in Rome, I first visited in Mr. Diamond’s Latin class. We spent the whole year in Latin I translating Caesar’s commentaries. We learned how to use Roman numerals. He drummed Latin grammar into our young brains so firmly, that I still tend to go back to the original Latin grammar structure when I need help with French, Italian or Spanish. Mr. Diamond’s Latin class was a combination of language study, Ancient History and Political Science all rolled into one class period.   I was with Roosevelt BEFORE 1928! He would announce as he got started on his frequent commentaries on politics. That would usually herald his analysis of the day’s hot political story. FDR before ’28, was his way of saying that his political loyalties predated FDR’s first term by four years. He definitely was a New York product. Jewish, degree from New York’s City College, married to  Elsie, an Irish Catholic lady and on a mission to make his favorite class, Latin a well-rounded learning experience for all of us brave enough  to darken his classroom’s threshold. You lucky kids! He would exclaim frequently as he call our class to order. You lucky kids! It was his way of saying it was time to settle down and learn, because it didn’t take us long to find out that he was a very demanding teacher and very strict about teenage classroom antics. Every once in a while when he saw that one of us wasn’t paying the proper amount of attention, he would launch a blackboard eraser in the miscreant’s direction. Invariably, the missile found its mark. Well, I finally got your attention, Blodgett! We’re on page 51. Your turn to read aloud! And the target of Mr. Diamond’s eraser toss would start reading, first in Latin and translate as he or she went along. To this day, I think of him as Mister Diamond. Even his own daughter Janice, another of his students, addressed him formally as Mr. Diamond, never Dad or Pop! Latin is supposed to be a dead language, he would often remark. It is your job as my students to keep breathing some life into it! You lucky kids!

We learned Roman history, from the city’s founding in 753 BC by Romulus and Remus, through the early republic, the building of the empire, the grandeur of Imperial Rome and the division of the empire into east and west, and of course, Rome’s decline and fall, and Europe’s descent into the Dark Ages. Time and time again Mr. Diamond would lecture us on the accomplishments of ancient Rome in medicine, political structure, military capability, the inner workings of conquest and how the empire not only conquered but maintained the integrity of its political structure. Everything that we students had come to believe had been developed within the two hundred year life span of the United States, Mr. Diamond would drum it into us that the Roman Empire did it first, and frequently did it better. Our laws, our constitution, the structure of our congress and state legislatures. Another favorite tirade of his, When your European ancestors were living in huts in the forest and swinging by their tails through the trees, Roman citizens were living their lives in a highly advanced civilization. Don’t you ever forget that.
We learned about Roman expansion, the rivalry with Carthage and the Punic Wars. Hannibal crossing the Alps in mid-winter. The slave uprisings, and the Roman dole system-Pane e circo, bread and circuses, the Coliseum and the games, the rise of Christianity, the sacking of Rome by the Barbarians and the inevitable fall of the empire. And all through our halting translations of Caesar’s Gallic Commentaries, Mr. Diamond carefully drew the parallels between the ancient history of the Roman Empire with the contemporary history of World War 2 and the rise of the American Empire. He was an ardent critic of the influence on Americans by Hollywood and Madison Avenue. At a time when television had not  yet become the force it is today, he was extremely wary of the impact on Americans’ minds wielded by the Hollywood movie industry and Madison Avenue’s advertising agencies. If the Russians ever decide to drop the A-bomb on us, he would say, I would hope that the first two bombs fall on Hollywood and Madison Avenue! That, in my opinion, would solve a lot of our problems! Yes. For a teacher of a long-dead language, used only in churches, our Latin teacher spread his wings in an effort to open our young minds.
So now, after four visits to the capital of the old Roman Empire, and in anticipation of future visits, if not a permanent residence, I still think about Morris Diamond, my old Latin teacher. And, to end this little creative effort, I’d like to relate a story from one of my other classmates, Shepard Scheinberg, who is now a Westhampton attorney. Scheinberg had brought back a stone that he had picked up at the Coliseum on his vacation trip to Rome in 1959. The following year, Scheinberg went to Rome a second time. When he got back, he visited Mr. Diamond, who was still teaching Latin up until the 1970s, and presented him with the stone as a souvenir of his visit, remarking to his old teacher that Mr. Diamond’s class made him feel like when he had visited Rome for the first time, he felt as it he had been there before. Years later with Mr. Diamond’s health failing, Scheinberg went to visit him at a nursing home. That’s when he asked his teacher if he had ever been to Rome. Mr. Diamond said he had not. As Scheinberg related in a “Letter to the Editor” of the local paper, the Riverhead News Review in 1985, “He was like his namesake, Moses. He too, saw the Holy Land only from afar, but never set foot therein.” Morris Diamond died in November, 1984. His wife, Elsie, followed him on his journey to the Elysian Fields just a few days later.
I still find it hard to believe, because our teacher, Morris Diamond made it all so vividly real for us. I’ve seen with my own eyes what he taught us about and I’m still scratching my head over his admission. But, then, we all considered him a great teacher, one of our most memorable, and, I guess that is what makes a good teacher a great teacher. You lucky kids! We sure were.
Ciao,
MikeBo
(Thanks again to Tim Holls for the RHS yearbook photos and the update information)
PS: Check me out also on www.mikebotula.com or  MikeBotula.blogspot.com
© By Mike Botula 2015
[ 1527 words]
Posted by Mike Botula at 11:59 AM No comments:

The Tour Guide Who Wasn’t There!