The Italian phrase means All Good Things Must End! And so, as this journey to my beloved Roma enters its final week, a bit of reflection is in order. I have been coming here since 2005, and since 2013 for increasingly longer periods of time, until I feel like a true ex-patriate, living in a world not completely my own, but fascinating none the less. This is my sixth in my series of Rome Diaries, titled Il Bambino! In Alexander’s honor. My new grandson Alexander is a pure joy! I dread the flight back over the Atlantic, but some mysterious force keeps pulling me back here, and I return time after time like a moth to a flame. For Rome has become my second home.


I missed Marsha Cincinnati’s Rome Comedy Club Night at the Makai. I had just arrived and was staying at The Penthouse, before my move to La Casa Grilli on Laurentina. So, with Michael and Laura preoccupied with all things Alexander, I begged Marsha’s pardon and promised her that I would catch her next show, which I presumed would be in December. But I hadn’t considered the fact that she might head back to the U.S. for the holidays. The result of our two ships passing in the night act was that I did not catch up with her until one weekend at Michael and Laura’s when I was finally able to give her the giant bottle of Melatonin Gummi Bears  that I had brought all the way from the H-E-B supermarket in Cedar Park, Texas especially for her. So, we at least had a chance to catch up. And, I swore that I would be in the front row at Comedy Night the next time I came to Rome. (Which, hopefully, will be in the Spring of the year, when it is neither too hot-like last Summer; or too cold-like it is this trip).


This is the second time I’ve spent the Christmas Holidays in Italy. The first time was 2013. Like every holiday this was a little different. For one thing, Alexander is here now, so that meant no winter holiday in Selci, in Sabina, at Sergio and AnnaMaria’s place in the country. So, we spent Christmas Eve at dinner at Tiziana and Pino’s apartment, a few doors down from Michael and Laura. Tiziana and Pino are part of the extended family. Tiziana can be likened to Laura’s big sister. Dina, Tiziana’s mom is a neighbor of Sergio and AnnaMaria. Following our Christmas Eve repast, we exchanged gifts. I’m happy to say most of the gifts were for Alexander, who snoozed in his stroller a few feet away. The next time the same group came together was January 6th, for La Befana, the Epiphany. This time, we were joined by Chiara, Laura’s sister, and her husband, Maurizio and their little girl – Noemi. Formal Italian meals usually run five to seven courses, and I have long-since learned NOT to take second helpings of anything! However, at the conclusion of our Befana repast, I found myself beyond stuffed!

When the holiday meals falls to Michael and Laura to prepare, a blending of Italian and American cuisine is evident. Some years ago, my son introduced Thanksgiving to his Italian relatives. Not only did he introduce the concept of Thanksgiving, but he did it with a whole roast turkey! (Tacchino Arrosto) No turkey parts for him. Since his visit to Texas in 2016, Michael has been heavily influenced by the Texas style of barbecuing which includes the art of SMOKING. This year, he ordered two Turkeys. One, he smoked. The other, he deep-fried. VOILA! A star is born! Texans traditionally spend many long hours tending their smokers. Not my son.


He has an “app” on his laptop that is connected somehow to a circulating fan that maintains the correct temperature as the meat smokes. It’s bound to catch on back home in Texas.


My friend and onetime landlady, Amina, has left on one of her adventures – this time to Vietnam. She had just returned to Rome from hiking in Norway; and with her two sons, spent a month in Spain and Portugal. During the Christmas holidays she was visiting with her family in Paris! The gal certainly gets around! When she was planning her Vietnam adventure, I remarked that the memories of most Americans about Vietnam are not pleasant because of the war, and I mentioned my brother Packy, who flew combat missions in Vietnam with the U.S. Air Force. (How I sweated until he returned safely). But Amina was undeterred by my recollections and flew off to Hanoi on her first stop. In her first photos she sent back was a group of school children that Amina had been collecting school supplies for. So, I learned for the first time that my friend had an ulterior motive for making the trip.


Last Sunday, my son invited me over to spend some time with Alexander and made it clear that I was to walk. So, at the appointed hour, I set out. Crossing Via Laurentina, I made my way to Viale Cesare Pavese, walked along for a while, turned left at the shop with the sign that reads Fiori e Pianti, and headed up the hill to the next left turn. I think you get the idea – it’s a long walk. As I took my life in crossing Viale Carlo Levi, Amina checked in on Whatsapp from Vietnam. Hi! What are you doing? She inquired. I’m hiking to Mike and Laura’s house, I replied.  Good! You need the exercise! She texted.  You sound like my son! I texted back. She sent me her latest pictures as if t say I’m having more fun! (I couldn’t argue with that. I was drenched in sweat and still had two kilometers before I reached my destination). When I reached Michael and Laura’s house, I found the smoker giving off the smoky aroma of ribs and discovered that I was in for another family gathering, which is what Italians do on a Sunday - La Famiglia! 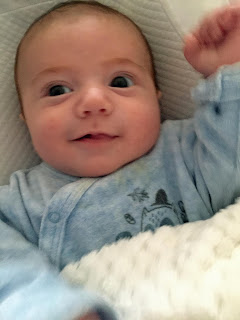 Alexander, it seems, is a very popular little fellow. Until the novelty of a new baby wears thin, everyone wants to spend time with Alexander. Including me. I love the little guy, but at that moment I am a soggy, sweaty mess from my hike. (Especially that last hill – which is a killer). So, before I knew it, the doorbell was ringing. Marsha was already there, so I finally was able to give her Gummi’s to her. The doorbell delivered (In no particular order), Beppe; Chiara and Nöemi; Sergio and AnnaMaria. The whole gang! The little guy was brought into the living room to all the Oohs! And Ahhss! That only a family and close friends can muster and passed around like a new toy – which he is. When we finally sat down for dinner, it was apparent that Michael had worked his magic again. The meat was falling away from the rib bones and the aroma of wood smoke wafted through the air. After dinner, Beppe grabbed his guitar and Michael got his Ukulele and the two stars of No Funny Stuff treated us all to a sample of the songs that have made NFS famous all over Italy.


The serenade was the climactic moment of another perfect Roman Day.
Ciao,
MikeBo