In the grand scheme of life…it was bound to happen, sooner or later!


On Thursday, as I waited by the Metro entrance immediately adjacent to the front of the Palazzo 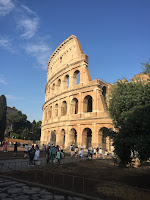 Naidi in Piazza della Repubblica waiting for mia amica, Alba, the hotel doorman approached me and asked me something in Italian. Sensing that he was asking why I was waiting, I reached into my shirt pocket for my cell phone and its Google Translator app and asked him for a moment for my answer. When I had composed my answer, I approached him and read my response.  Sto aspettando per una amica, I told him. (I am waiting for female friend). As luck would have it, Alba arrived and showered me with hugs and kisses to both my cheeks in that time-honored Italian manner that I have come to know and love. (Especially when a beautiful woman is administering the hugs and kisses). Alba spoke to the doorman in Italian. He answered her in perfect English. I’m sorry, ma’am! But I don’t speak Italian, as I was trying to explain to your friend. Alba, who speaks beautiful English, responded, but my friend here is an AMERICAN. He is just learning Italian! That’s when I came back into the conversation. Where are you from? I asked the doorman, who by this time was sporting a smile as big as Texas. I am from Gambia and we don’t speak Italian in Gambia! I later discovered, after Googling Gambia, that our doorman comes from a small, west African country that is almost surrounded by Senegal. His native language may be Mandinka, but it’s certainly NOT Italian! As if to cement our new friendship, the doorman asked if he could do anything for us. We asked him to hail a taxi for us. I tipped him, and Alba and I were soon headed to Campo dѐ Fiori.


Alba works at the gift shop at one of the most popular attractions on one of Michael’s tours, the
Capuchin Crypts. In the ten years since Michael has been bringing literally hundreds of tourists to see her in the gift shop, Alba has never heard No Funny Stuff perform in person. I met her on one of Michael’s tours some years ago. (She refers to me as her American friend, and I, in return refer to Alba as la mia bellissima amica Italiana). Or Mia Cara Alba on Facebook, which is how I stay in touch with all my Italian friends in between my visits to Rome. So, after a short taxi ride to Campo dѐ Fiori, we were at the Taba Café, all ready for a night of No Funny Stuff.

No Funny Stuff seems to improve with each performance, and the guys were really on their game at the Taba Café. Hearing all the music coming from the Taba, crowds of people started drifting across the Piazza to get closer to the music. Much to the dismay of the other café owners, who were losing their customers to the Taba and No Funny Stuff! So, about fifteen minutes before the band was supposed to finish, somebody called the cops! La Polizia showed up and the music stopped immediately. Apparently one of the other club managers saw nothing funny about all the attention that No Funny Stuff was drawing.


The next evening Michael and Laura called and invited me to join them for dinner at the beach in Ostia. An opportunity for me to dine on the shore of the Mediterranean doesn’t come too frequently in Texas, so I quickly accepted their kind invitation. Of course, they brought along Sofia, their swift, black Volpino, who was more than ready for a romp on the beach. As I’ve said, the Italians bring their dogs everywhere!
The Romans called the Mediterranean Mare Nostrum, (Our Sea) and woe betide any interloper (e.g. Carthaginian) who might attempt to wrest control from the mighty Roman Navy. We all went for a walk along the beach before dinner. I love the beach at twilight. The crowds of beachgoers have all left after a day in the sun, and the only people left are strollers like us.  And Sofia, who pursued her Frisby into the surf more than a few times. After our stroll and appropriate number of selfies, we walked back to the restaurant and sat down for dinner.  There is nothing like a fresh seafood dinner on the shores of Mare Nostrum, unless it’s lunch high above the Eternal City overlooking the Circus Maximus with the dome of St. Peter’s Basilica, the Forum and the Coliseum in the distance.


I had invited Amina to join me for the July 4th Celebration at the American University of Rome. The entertainment was being provided by, surprise, my son Michael and his band, No Funny Stuff. I’ve rented Amina’s apartment several times since I’ve been traipsing back and forth from the U.S. and Rome, and we’ve become friends in the process. She is originally from Morocco and speaks four languages, while I struggle with just my Italian. After the Fourth of July celebration, we had plans to meet for dinner, but because of a communication problem on both our parts, she was leaving for Paris on a trip that would take her out of Rome past my departure date for the states. So, I was surprised to see a text message from her inviting me to come and meet her for lunch where she works. Amina works at FAO, the international food organization of the United Nations. It’s across from the Metro stop at Circo Massimo, the Circus Maximus, where the ancient Romans held their chariot races. (Yes, Charlton Heston fans, THAT Circus Maximus)!


What Amina hadn’t fully prepared me for was the intense security shield at her building. I’ve grown accustomed to the increased military and police presence at the landmarks in Rome since my first trip in 2005. The Italian Army seems to be everywhere in Rome, and I had to walk by squad of troops to check in at the visitors’ lobby.  As I approached the bullet and blast-proof wall that awaited me, I had the unnerving feeling that I had a thousand unseen eyes focused on me. As I passed through the metal detector, I entered a cylindrical chamber which simultaneously scanned every inch of my body and acted as containment chamber for any explosive I might have concealed. I passed through this area only to face a person behind another wall of steel and glass. Do you have your ID? An anonymous voice asked. I slipped my Passport Card and my Texas drivers license into the slot. Both were returned a moment later. She will have to come down and get you. Now, she is not answering her phone, said the anonymous voice. I was instructed to step to one side and call Amina. A few minutes later, she arrived with a big smile on her face. Have any trouble? she giggled.


The view from the top of the building was breathtaking. After a few pictures, we enjoyed our salads on the top floor veranda shaded from the sun beneath an awning. The view and the lunchtime conversation were worth the price of admission.


On Saturday, Michael came over on his scooter to my place for another father and son outing. We walked to the bus stop and boarded a bus for the Laurentina Metro Station where we caught a train for the Coliseum. On the way, the skies opened, and it started raining. By the time we got to the Colosseo Metro stop, the terminal was jammed with tourists who had taken refuge from the sudden downpour. We waited for the rain to stop. When it did, my son gave his dad his best tour guide’s personal tour of the Coliseum and the Forum. Later, we met Laura for inner in Rome’s ancient Jewish Ghetto. More on that evening in future Rome Diaries.


This is my final blog from Rome, but not my final Diario di Roma Cinque. I’ll post a few more when I get back to Texas.
Caio,
MikeBo